The Rest of the Story!

Time has gotten away from us so quickly since our return from Kenya. We barely had time to recover from the work done while in the Nairobi area, from the travel home and from the major time change before being catapulted into the ongoing COVID 19 situation across the world. We turned our attention to our family and loved ones and away from our blog followers. We haven’t forgotten you! Read on!

The rest of the story!

February 24:
Today we met with Mary Thamari and the staff from Life in Abundance before traveling with them to a Masai village. It was a day to distribute Days for Girls (DFG) kits and goats. For those of you who might not know Mary, she has been the driving force behind County Girls Caucus, a 4 day retreat/workshop meant to empower girls and bring them to the understanding that they do not have to be married at a young age (as early as 10 yrs old in some villages) and do not need to be submitted to female genital mutilation (FGM). Of course they work with the family members as well.  Tumaini Afrika and our local Zonta Club have been great supporters of Mary’s work throughout the years. Now under the umbrella of Life in Abundance, Mary and her staff have expanded their reach to many villages outside of Nairobi. They also offer an increased number of programs to help families improve their lives, including one similar to Girls County Caucus.

A two hour trip to the outside of Naroibi brought us to a small village where we were introduced to and welcomed by a small group of women. Once those introductory proceedings done, Mary took the floor. We witnessed Mary talk about female genital mutilation to grandmothers, daughters and granddaughters. She passionately recounted stories of her Masai roots and proudly spoke of her success as a wife, a mother and a well-educated working woman in today’s world without having to go through FGM. It was the most powerful message coming from someone who is one of them. We are sure she changed the path of many that day!

Linda and Judy were called upon to explain the use of and distribute Days for Girls kits to some very happy people. Then came the distribution of goats to many young girls.   Recipients were matched with a team Faraj member and invited to select their goat amongst the goats wandering in a small enclosure. This was a sight to see for the Tumaini Afrika newcomers! Girls skillfully ran after their goat and caught them by the ear or the leg and held on tight, ignoring the goat’s continued protests! Each girl had their goat in hand within a matter of seconds! Quite impressive really! A special shout out to Judi who attempted the capture of a goat for her recipient but was beaten to the punch. An admirable and valiant effort Judi!

As we all celebrated this distribution of goats with a soft drink, a treat as special as champagne, the girls were invited to look at their goat as a challenge... to care and raise their goat as an investment in their future because it could be used to pay for their education among other things.  Team Faraj members received very heartfelt thank yous from the mothers and grandmothers for helping them to invest in their family’s future.

Kudos to those supporters who purchased goats! It truly is a life-changing hand up! 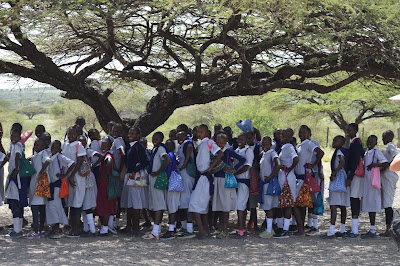 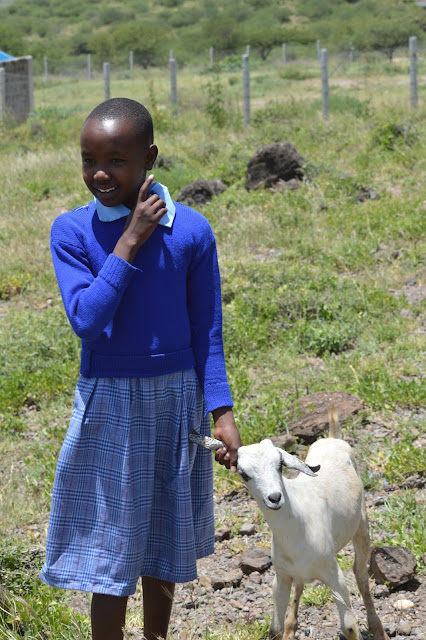 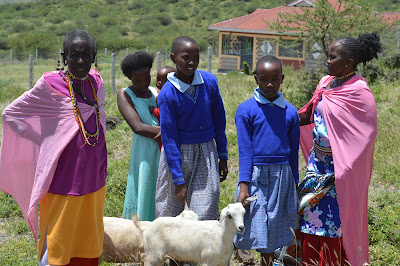 February 25:
We traveled with Mary Thamari and different Life in Abundance staff to a another village, this time north east of Nairobi. Travel to this village was set to take about 2 1/2 hours but traffic and construction made for a very long 4 1/2 hour trip! When we arrived, we were whisked into a classroom to distribute DFG kits to students and staff. Girl power was at its best as 100 girls showed off their newly acquired kit and celebrated the fact that they would not be missing a week of school per month. More goats were distributed that day. Thank you to Stephen from Life in Abundance for organizing such a successful and efficient distribution. Each goat was numbered and tied with a rope and given by a Team Faraj member. We were very happy to see that Faraj, Mary and Stephen were able to participate in the distribution as well. It was symbolic of the relationships and partnerships developed with the people and agencies who help us bring hope to so many in Nairobi and area.

Note: The current market for goats has been a challenge making it impossible for us to distribute the 125+ goats purchased before this trip. Those goats not distributed will be bought and distributed throughout the next few weeks.  Thank you to Mary and her team for making sure many more girls will be gifted a goat in the near future. 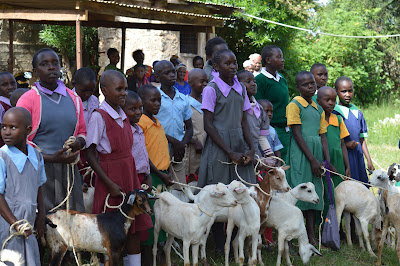 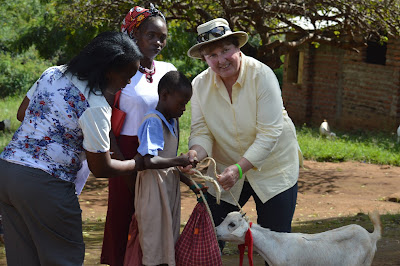 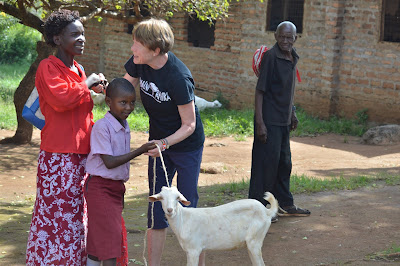 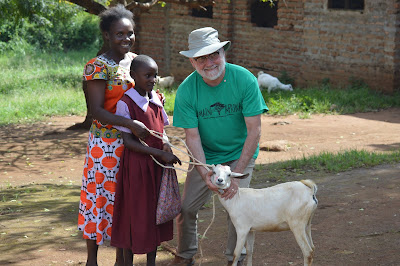 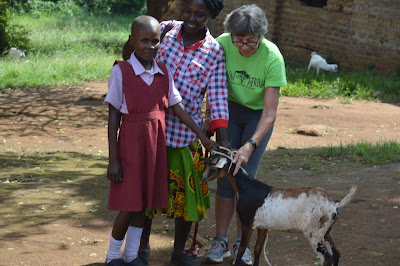 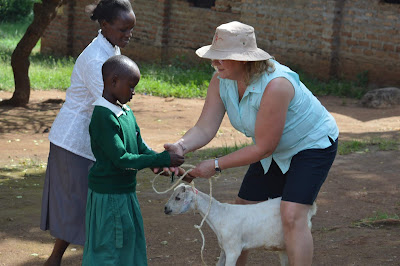 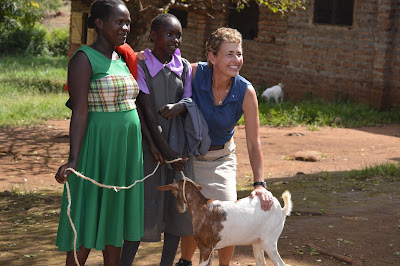 We spent the morning at Compass school. This last visit with the students and staff was bittersweet.

We enjoyed distributing many gifts including toothbrushes to all, pillowcase dresses and underwear to the girls and socks and underwear to the boys.   We learned that the board had organized a workshop for the teachers on how to prepare classroom teaching materials. Staff got right to work to create their own materials with the supplies we had brought them the week before. The fruits of their labour were proudly displayed in the classrooms, a truly wonderful thing to see and a sign of their devotion to their students.

Then came the hardest part : time to say goodbye! It is difficult to explain how you can grow so attached to people after just a few brief visits but you do! Through our interactions, we were given many reminders of why everything we do here and back home is so important to them and their well-being. Without a doubt, it is all worthwhile.
We left after some long (and tearful) hugs, knowing nonetheless, that with Flora at the helm, things will continue to flourish at Compass school. We are already looking forward to our return in two years to see all the good things that have happened since our departure. 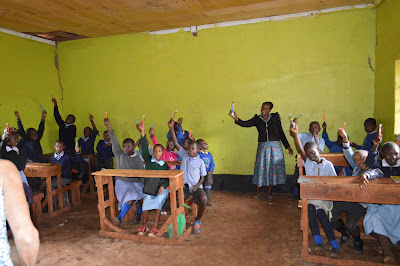 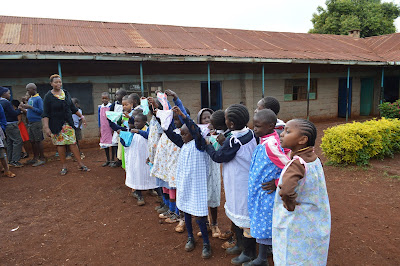 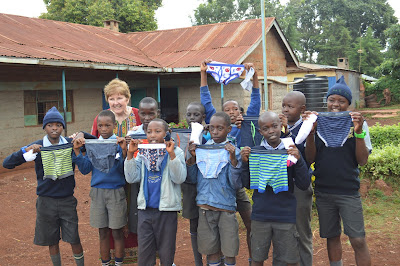 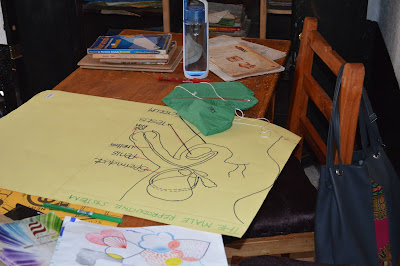 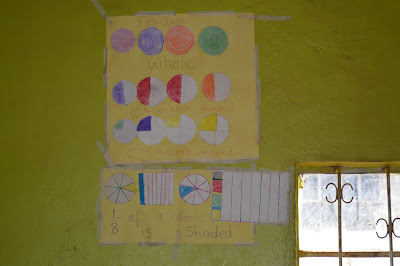 Visits to Amani ya Juu and Heshima were slated for the afternoon.

To paraphrase from their site : Amani ya Juu, a Swahili saying which means “Peace from Above", is a social economic enterprise committed to peace and reconciliation for women from many African nations and cultures. They create quality fair trade home goods and accessories using African materials and sell such items in their gift shops.
We did a little shopping to support their works, had lunch with Julia Clark,(who you might remember attending our meeting with David Wakogy and the Compass School board members), were treated to a tour of the facilities and then returned to do a little more shopping. For more information on Amani ya Juu, checkout their site :


Heshima was our last stop of the day. It is an institution that was founded to help mothers and families from the slums, with special needs children. Unfortunately, in Kenya, such children are often locked away due to public shame or receive no support if they manage to attend a public school. Based on the belief that all human beings are made in the image of God, the Heshima Foundation, founded by the Hagman family, opened its doors to meet the needs of these special children. They provide meals, offer medical interventions, special education, occupational, physical and speech therapy, sign language and horse riding. Although they are mostly dependant on donations to run all these programs, they also run a boutique called Dignity Design where they sell items created by the students, mothers and supporters. 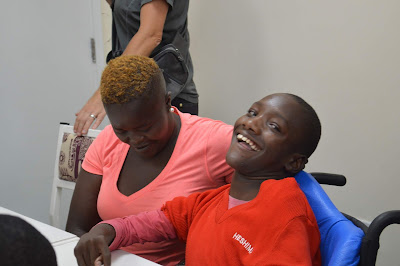 After a visit of the facilities, including the boutique, Team Faraj made a very special presentation to Tracey, one of the founding members of Heshima.  A donation was made in memory of Ford Upton, Tumaini Afrika member Wendy’s late husband. Ford was a kind man who volunteered many hours for the good of his community especially children. How fitting that a donation be made to Heshima to honour his works! A plaque will be displayed on the site to commemorate him and his contributions.
For more information on Heshima, check out their site : 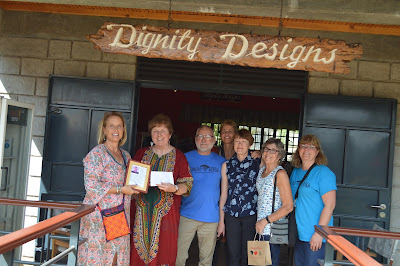 And so ended the work of Team Faraj for this 2020 trip to Kenya.


The next few days would allow us some time to take in a few more sights, debrief and decompress in preparation for the long journey home.